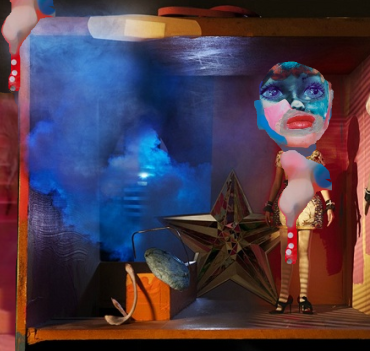 Pepito looks out over his castle.
I like the way he stands, like a king, but with so little royalty.
I wonder if it’s possible to be rich on the inside, but poor on the outside – like when people look at you, hypocritically, and believe you are shabby.
Sometimes I do that. I see a lady and then imagine her at brunch with all of her family; table adorned with silver cutlery, roast pork, blood-red wine. I imagine her flicking through Women’s Weekly, scanning over beautiful women and sighing, in awe –  envious for that face, that life, burly husband and million-dollar mansion.
She wears clompy yellow heels and a flowery gown. She looks like a stupid woman. Is she really stupid?
He looks so free, this little Lego man.
I take him from his fortress, tell him I am sorry, and lay him on the ground.
He doesn’t look like anything special – just a little slave boy with scruffy hair and a bad dress sense.
‘Hello,’ I say. ‘I’m Oscar.’
He doesn’t bat an eyelid – he just stares up at me with that unchanging expression; dirty cheeks and grotty hand-me-down trousers embellished with muck and tears.
He likes the sunlight, I can tell, so I take him over to the window and stand him up. I bring over a car and he hops in, flicks his straggly hair from his shoulders and drives off.
He doesn’t even say goodbye.

Today my friend Harry didn’t visit. My mum says his mum’s gone out of town and taken him with her. She also said something about his father doing a runner.
Like Road Runner? I asked her.
Indeed, said mum.
I don’t like the idea of running away, but the more I think about it, the more my interest grows, and it builds and builds until I decide to pack a bag and escape in the moonlight.
I fold some pants – khaki ones – a few t-shirts, and some Spiderman undies into a small backpack. I add a book my mum gave me when I was four. I haven’t read it but it looks fascinating.

By the time I leave it is 12:51am and I slip out the front door. I like this kind of light. It is eerie but it also makes me feel like I am doing something exciting, like the moon is congratulating me with its silver beams. I wonder if mum will miss me, if she will look in the mirror and start to cry because her face reminds her of my own.
Mum always cries.
She tells me she cries about our cat, Freda, who died last summer.
I know she’s crying about daddy, though, because she didn’t even like Freda; she tried to kill her once by flinging her at the wall.
Daddy got depressed. He lost his job and his best mate Gregory Jackson got murdered by his own mother. I remember Gregory’s mum. She lived next door to us for a while. She wore purple velvet gowns that fluttered about her hairy toes. She smelled a bit.
Sometimes she would sing along to old religious ballads at the top of her lungs and take baths with the curtains open; wave her naked body around in the candlelight, skeletal and limp like a dishrag. Her boobies would shake and jiggle around like jelly on a plate, dancing with her. Then she’d wink at me while I was goggling at her slightly monotonous female bits, and I’d blush and go downstairs to pretend like nothing had happened.

On August 1st I walked out into the garage to show daddy my school science project. I had made it, thinking of him – dressed the Lego men as he would have liked, and painted their faces so they looked extra special.
I found daddy hung up by a rope from the ceiling plank, arms cut open, face plastered with terror, head hanging by a thread – resting against his chest as if to pray at Mass.
I screamed, ran to mummy, and brought her out to the garage.
She fell onto her knees and clung to his body all night. She didn’t leave his side for the next few days. She watched him deteriorate, stink up the garage and attract flies.
When I went inside, Freda’s guts were strewn across the floor, along with chicken focaccia and stale wine. I watched little ants crawl about. I curled up on the floor next to them. They were nice company. At regular intervals I got wafts of the repulsive odor of rotting eggs and poisoned rats, starving in the thin plaster walls.
I went to bed and cried for hours and then I went to rob a bird of her eggs.
When I cooked them in the morning I could see the half-formed chick, with its little red head and body. It looked disgusting, but I still ate it.

Romy Durrant is a writer from Melbourne currently living in London.

Penny Goring lives in London. She makes things at pjgoring.tumblr.com