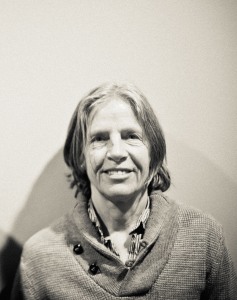 What Would Heal My Weird Heart?

At her reading at Pace University, New York City, we give Eileen one of the tacky NYC post cards we bought – 18 for $1. Afterwards, we email her and ask about the possibility of talking to her in Texas three weeks later. She replies immediately, nonchalantly: Yep. See you in Texas. We drive to Texas from California over five days. We stay in an airport motel, dress for the conference in a car park, and meet Eileen at the Queer Poetics Conference event at the Texas University at Austin where she is introduced as the most crush-worthy poet in America.

EM: ‘I like to empty the word ‘queer’ of gender or sexuality entirely and just make it be queer-shaped, odd-shaped –having a sort of off-ness. That’s what’s attractive about it: it’s something slightly unmanageable [that] you have to figure out.’

‘Poetics’ defines ‘the struggle from moment to moment,’ says Eileen. ‘[The] incredibly brave feeling that turns really shitty and suddenly you’re like “Oh I can’t do this” and then like “Maybe I can.” The shape of my existence is really queer, I feel. And so my poetics really holds me – it’s a management style.’

Of hybridity and the poetic memoir:

EM: ‘I feel like the whole development of the book is just giving yourself prompts. I would write one section and then I was like, okay, and then…I would just wait for an idea. Chelsea Girls was the first book of prose I wrote and it evolved from chapters.…I knew I could do 20 pages and so I thought “I’ll do that again.” For me it’s an organising of the energy in a particular direction once I know what the direction is.’

EM: ‘I just know its a poem, it’s an absolutely different experience of writing and feeling. …I like poems because they’re very realisable: you can achieve a poem; you can see the whole poem. It’s often one page, there’s one self writing it, and usually I’ll remain that self at least for the length of the page.

What I‘ve discovered is to write in small chunks and let that chunk determine the form and state and then stay with that.…Then the whole book can grow that way – not having to conform but being a lot of different shapes and symbols.’

‘The great burden of being an intellectual: what kind of work of consolation does the intellectual poet write for herself? Well you write the one you need! You know, like what would heal my weird heart? Making that, you know self-help book for me, that I would need.’

‘I love to read sci-fi.…Everyone tells me to read Octavia Butler and Ursula K. Le Guin and I’m almost adverse to it because I don’t want to read the obvious authors for women…I was at [National Book Awards in 2014] and Ursula K. Le Guin gave a speech and totally flipped the room out. She was basically saying – to the whole publishing industry – ‘You Suck!’ and it was so amazing and she was so old and so tough and so gnarly and so strong and she was just saying that writing is about thinking – it’s about changing people and changing their minds.’

Eileen talks about the impact her celebrity status has had on her voice and writing: the curse of newfound renown. She then recalls her visit to an ‘endangered youth’ writing program where she was asked to create a writing prompt. Her advice? ‘Pick any age in your life and go down the drain with it.’  To conclude: ‘Everything ruins your life; everything ruins your writing – so would attention. That’s your new problem.’

In New York, we buy Eileen’s newest poetry collection (2015) I Must Be Living Twice. It sits with us in our van, we read her words aloud as we drive from west to east of the United States – through desert, alpine and coast. Eileen is the soundtrack to our 20s, and to America. This trip has been our drain – a half-year mess we’d happily go down again.

Eileen Myles is the author of nineteen books including I Must Be Living Twice: New & Selected Poems, and a 2015 reissue of Chelsea Girls. Eileen is the recipient of a Guggenheim Fellowship in non-fiction, an Andy more . . .