Hysterical Orgasms and All The Violence: On Mystic Women in the Medieval Period
Samantha Abdy

The creature glided across the ceiling, feral and sweet – a baby; his face of unparalleled beauty. Sweat gleaning over his small features. In his sweet baby hand he held a spear of long gold with a flame at the end. She reclined, lips spread. He thrust his gold spear into her heart and then also into her entrails, when the spear exited her guts spilled out, leaving her all on fire with a great love for God. The pain was so great it made her moan, and yet so sweet was this excessive pain she longed for more, forever. The spear went in, and pulled her out. In and out. Her soul was satisfied with nothing less than God.

This, more or less, is how Saint Teresa of Avila described her most famous vision of ecstasy in her autobiographical writings. I’m not religious and I am not much interested in religion. My line of enquiry, more often than not, is the erotic. My sustaining personal and academic interest is feminism. Upon discovering the medieval mystics, I found a beautifully subversive intersection. I now go into Catholic bookstores and buy the small icon cards of the mystics I love most. In the heart of Melbourne city is a cathedral I sneak into and staring at the ceiling I consider for a while the fucked up saints and their orgasmic visions. I can decipher the symbols used in icon pictures; lilies for purity, pink roses for heavenly love. A representation of one particular nun has a small black and white cat drinking the milk of human kindness at her feet. Cute and weird as fuck.

In her strange nocturnal journeying into the soul and its mysteries, the females of the medieval period were almost uncontested by their holy brothers. History is littered with them: paralysed, quivering, and dissolving into God. So the priest must put aside his reason and tend to her madness. He waits beside her, hoping to decipher her visitations – her communication with Jesus, God, the angels that visit her and pull out her insides. She goes quiet and exits.

These women left their bodies. The embodiment of the female subject is a complicated matter. For one thing, women are trapped by their body: the female body is a public space, available for comment, appraisal, and injury; violence, molestation, rape. A woman is seen before she is heard. She doesn’t entirely belong to herself. The male gaze has also somehow entered female consciousness, and this is how the objectification of women turns women into spectators of their own selves. This is an observation before it is a critique, because out of this bizarre stance women occupy comes a proliferation of activity and (girl) culture that is generated from this straddling subject/object status.

I bring to our attention the selfie: a picture one takes of oneself and shares via the Internet. The success or popularity of selfies has a gendered tendency I think we can all agree upon. Does this debase women or liberate them? I feel ambivalent, personally. It does both. Depends on intention and desire. My medieval mystics, stabbed in the guts, locked in exquisite agony – they were in two places. Inside and outside the body. They experienced orgasm without touch, lying still, almost asleep. I’m still working on that.

An ecstasy is a state when one is outside of themselves. To leave the body and return, like an alien visiting unknown planets. No way to absent the flesh entirely. In an ecstatic state many of these women entered paralysis, leaving the female container inert while she sublimated into fantasy, elsewhere, untranslatable, outside the order of language. But then she came back, and a man interrogated her visions and wrote them out in a Latin she couldn’t understand. Problematic for any feminist claims. Is there a way out without return to the patriarchal order? Hilary Mantel wrote an essay for the London Review of Books called ‘Some Girls Want Out’ and as a girl who often wants out I read the text with zeal. She loves the mystics like I do. She tells us how:

St Maria Magdalena de’ Pazzi lay naked on thorns. Saint Catherine of Siena drank pus from a cancerous sore. One confessor ordered Veronica Giuliani… to clean the walls and floor of her cell with her tongue; when she swallowed the spiders and their webs, even he thought it was going too far… St Angela of Foligno drank water contaminated by the putrefying flesh of a leper.

These disgusting women, so holy, so gorgeous. They’re saints now, we have icons of them rimmed in gold. They were told they were the pinnacle of sin: female, dirty, abject, and they went so deep into abjection they came out pure as snow.

I love these women, and they were fucked up, religious, anorexic. They seem so strange, so focused. St Catherine of Siena didn’t really eat. She was named the patron saint of Italy and was a doctor of the church. She was an activist, a leader with a circle of devoted followers both inside the order and out. She travelled widely, carried on an extensive correspondence with leading political figures and intervened in affairs of state. Even the pope listened to her. She held power. For a woman in those times, she went beyond her limitations and was a total weirdo.

Their bodies fascinate me, what they did with their bodies. They starved and punished them. Deprived of sex and often of food. They said no. In ecstasy they abandoned them altogether. Veiled in robes of black and white or brown like the Carmelite order, they took themselves back from the male gaze. They seized what little control they could and within the order of the church, the patriarchy accepted their insanity. These women were wild. Saint Francesca Romana is rumoured to have burnt her own genitalia with pork fat and candle wax, a girl I know pierced her labia and clitoral hood all in one session. The hair shirts the nuns wore remind me of dedicated Perth Goths wearing latex throughout 40 degree summer days. They had steel girdles which disfigured their flesh and bled out of sores from overuse. We tattoo our bodies with a claim to this flesh not unlike that. Sometimes it can feel very isolating being alive and female. But I realise it has always been that way. And that in itself unifies the feeling into a collective of experience. Experience is what brings abstraction down from the clouds. Experience brings us back to embodiment. To feeling. To ‘female’ claims.

I have been looking at history for my legacy – the lineage of women that have been wiped from its pages or exist in the margins. So far I can discern at least two groups of pre-modern female collectives: the witches, and the nuns. I am searching for sites of feminine resistance. I realise that as long as there has been oppression there has been resistance, and for women this resistance is not framed in masculine terms; not in displays of (physical) strength, violence, war, no such tactics would have survived. Instead I see something covert and irrepressible. From the hysterics of the 19th century to the mystics of the 16th, women have gone ‘mad’ under patriarchal law and before science locked them up to be studied and experimented on, the Church pronounced them as saints. These women heard voices, saw visions of angels and demons – hallucinations that went for days; paralysis, stigmata; ecstasies that were said to have lasted for years. At the time, these kinds of radical experiences were deemed holy. So was the anorexia and masochism they submitted themselves too. It was all legitimate.

Legitimate and horrendous. To get out, these women rejected their bodies. They exited, abused, defaced them. Who won? The patriarchy, that’s who. The witches were outside the patriarchal order and they were burned at the stake. The mystics were both inside and out. They were canonised. They preserved themselves at great cost. Making a thorough critique of the mystics would reveal further compromises but it is the observation which snared me: of their ‘madness’ and the way its performativity bettered their positions of power. I know I would rather be a witch than a saint but that’s because the dream has no purchase on me. The dream being the illusion of order / authenticity that the patriarchy promotes. Imagine really believing in God. Maybe you would want to fuck him too. 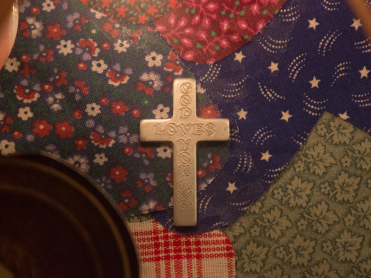 One time I had a dream I was making love to a woman on a faded red couch. Everything was so bright. I was nervous. All inside me shivered and streamed. I woke up as the vision was disintegrating, some half place between consciousness and not. My wet dreams are the closest I have come to experiencing an ecstasy. I don’t tell anyone about them. It’s not a real way out.

Samantha Abdy is a writer who lives in Melbourne. Her work explores feminine psychology, becoming and the unsaid. You can read more of her work in Scum Magazine.